L is a very slim, tall young man with messy black hair and dark eyes. One of his most noticeable features is the shadow below each of his eyes, a result of him being an insomniac. L is always shown to be wearing blue jean trousers and a long-sleeved white shirt. He almost never wears shoes or socks, preferring to go barefoot, even while in public. This was shown when he visited Light Yagami's school and was seen barefoot while sitting on a bench, not bothering to wear his shoes until he got up to walk.

After meeting the Japanese Task Force, he requests that the task force refer to him as "Ryuzaki" as an additional safety measure. The Task Force never learns his true name, and it is revealed in neither the manga nor anime.

L is very intelligent, though his disheveled and languid appearance masks his great powers of deduction and many question his abilities upon viewing him. L tends to second-guess everything he is presented with, and is extremely meticulous and analytical. He is good at deceiving his opponents, and is willing to take drastic measures to solve a case. Some of his tactics are quite bold, such as having death row inmate Lind L. Tailor pose as himself on live TV in order to draw out Kira, while others seem bizarre to those involved, such as handcuffing himself to suspected-Kira, Light Yagami. He is also shown to have a dry sense of humor, and he isn't above making sarcastic remarks to people. Although he tends to be polite, to some (such as Task Force member Shuichi Aizawa), L can seem condescending at times.

L was found by Watari as a child and was taken to the orphanage known as Wammy's House, a home for gifted children. Sometime after, Watari realized that L had incredible intelligence and later assisted him in his cases. L became a detective at a young, unknown age and eventually gained a reputation as the greatest detective in the world whose opinion is highly valued. 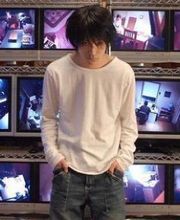 L retains many of the same characteristics seen in the original series. At the end of the first film, L eats potato chips in front of Light; Light understood this to mean that L was still suspicious of him, as Light had used a potato chip bag to hide a mini LCD television from security cameras while L filmed his room.

As there is no time delay between the first and second films, the second film begins soon before L supposedly dies. Unlike the manga and anime, in the second film, his original "death," caused by Rem writing his name in her Death Note, does not take effect, as L had written his own name in Misa's Death Note earlier. It is his self-sacrifice that allows him to stay alive for a longer duration (as he supposed that Kira would kill him on that day), and allows the investigation team to apprehend Light. After Ryuk kills Light, Ryuk offers L the Death Note. L refuses, and Ryuk, while saying that L is boring, leaves.

Twenty-three days after writing his name in the Death Note, and after burning all the remaining Death Notes and having a conversation with Soichiro Yagami, L dies peacefully while eating a chocolate bar, with a picture of Watari lying right beside him.

L: Change the WorLd chronicles the 23 days that L has left before he dies. L decides to solve one last case. He is in charge of stopping a deadly virus from spreading across the world. Ryuk comes to his aid on behalf of Kira's last wishes. Hideo Nakata, the director, told The Daily Yomiuri that he wanted to exhibit L's "human side," a quality which was not made all too apparent in the Death Note series.