zaidi ya mwaka mmoja uliopita 30degrees said…
Name: Faina
Talent: air and wind! she control the air and the wind!
personality: she is patient and really quiet... sometimes she is shy but when you get to meet her she is really nice!
fav color: sky-blue!
fav flower: white rose!
fav food: chocolate cake!
worst fear: she doesnt like to be alone in the darkness
clothe: she wear a simple white dress with sky-blue decorations. and sky-blue shoes.
hair: long blond hair. with pins in shape of a sky-blue flower.

sorry I dont have any picture

dear 30degrees: you are in! thanks for join my roleplay! oh and dont worry about the piic!

hey,i am soooooo in!

Sorry,i am working on the pic.
Oh and there r only 5 talents.Gardening,tinker,water,light and animal and even winter.But as u playing wild here suit urselves.

cool! thanks for join!

oh and there are not only 5 talents... there are alot more!
music is one of them! Bess is a fairy of art, and dulcie is an cooking fairy... I already read a lot of books of disney fairies and there are a lot of fairies!

zaidi ya mwaka mmoja uliopita chrie said…
sorry if it's soo late I'm soo busy these days but I'm still up 4 it
Name:vicky
talent:winter and light
personality:she's the most talented ice and snow and light fairy in all of the fairyes with her talent too there is she can stand in the cold that's why she lives in the winter woods she can make snowflakes 4 any1 who want her to do that but u'll have to do a little favor u just need to bring her 10 snow grains then she can craft up to 1-4 snowflakes 4 u 4 some decorations and acssesorices she can desingn dresses and acessorices but she can only desingn the look so she needs a tinker fairy's help to tailor the acssesorices and outfits she just look 4 the materials but it's not that easy to search 4 the materials sometimes she'll have to go to the cave in her home part to search 4 the needed jewels which she uses her light talent she can creat rainbows by her self using melted snowflakes and her light but that only produces smal rainbows but they r also exteemly bright too and can be connected with other rainbows too
fav color:neon blue and all kinds of blue including aqua
fav flower:blue rose(not rose or any other kinds of roses just the blue roses 1)
fav food:anything salty and a bit spicy(like my self hehe)
worst fear:being captured by hawks,eagles and any kinds of danger
clothes she wears a neon purple top and a violet colored bottom
hair:she has neon blue hair

cool! thanks for join Chrie!

zaidi ya mwaka mmoja uliopita CyD12 said…
thanks for join stellawinx4eva! you are in!

hey guys! I need more people to start the roleplay! if you know someone who would like to join please ask them to join!

Name: Gwen
Talent: animals! (like beck)
personality: She is funny and smart! She has more animal friends than fairies but she still loves to make fairy friends!
She is nice with everyone but can get mad fast...
fav color: Green & yellow
fav flower: Dandelion
fav food: Muffins!
worst fear: see dead animals...T_T
clothe: She wears a short Green dress with Yellow details in the top and in the bottom of the dress. Green boots and a necklase with a yellow stone in it.
hair: She has a medium size hair color Brown with blond streaks.

sorry I dont have picture...

zaidi ya mwaka mmoja uliopita CyD12 said…
cool! your in!

zaidi ya mwaka mmoja uliopita CyD12 said…
yay! thanks for join! just one question... what is the color of the hair?

Um nadia when do we start?

zaidi ya mwaka mmoja uliopita Sugar-N-Spice said…
For those who would like a longer list of fairy talents to choose from:
link

zaidi ya mwaka mmoja uliopita Sugar-N-Spice said…
Is it too late for me to join?

@Chrie: I will start it when 2 or 3 more ppl sign! dont worry! I will tell you when it starts!

zaidi ya mwaka mmoja uliopita Sugar-N-Spice said…
Okay still working on it, but here's what I have so far.

Name: (Still trying to think of one)
Nickname: (needs one)

Talent: Mainland Scout (not sure if this is a real talent, but basically she’s a member of a team that goes ahead of the other fairies to scout out the mainland before the changing of the seasons) and secretly a singing talent but hardly anyone knows because she’s too shy to sing in front of others.

Personality: Wild, creative, shy when she first meets people or is around fairies she doesn’t know, has a hard time making friends due to her initial shyness, emotional, dramatic, stubborn, has a tendency to take off and not tell anyone, loyal to the friends she does have, has quite a temper if she feels like she’s being controlled (but not quite TinkerBell level), curious but tries to hide it, hopeless romantic, intelligent, non-judgmental

Favorite color: She doesn’t even know. It often changes day to day.

Worst fear: Being trapped. After an incident of having something fall on her and trap her underwater for a period of time, she can’t stand the thought of being trapped or controlled. Even just feeling so often causes her to act abrasive.

Clothes: in the picture is only one of her outfits; however unlike this one she often tries to incorporate lost things into her wear. Also, contradictory to the fashion sense of most of mainland scouts, she enjoys wearing prettier clothing. While the other M. Scouts wear their camo clothes daily, she only wears hers when she absolutely has to. 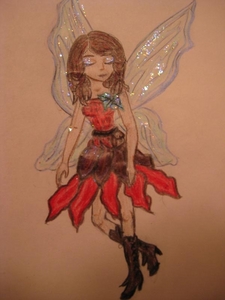 not to be mean GypsyMarionette...but the questions I put where the ones that I neded to know...if I need something more about a character I will ask them.

@Sugar-N-Spice: Love your character!!! You are soooo in!

zaidi ya mwaka mmoja uliopita GypsyMarionette said…
Sorry doll.
I just wanted to for myself. That's all.

zaidi ya mwaka mmoja uliopita Sugar-N-Spice said…
CyD12: Can we answer GypsyMarionette here if we want to, even if you don't need the information?

Talent: Sewing (helps with the Fairy Tale Theatre costumes), Art (she can sketch her designs),

Personality: Inquisitive, theatrical, impulsive, intuitive, daydreamer, sometimes acts more immature than she realizes, smarter than others think, not afraid to stand up for what she believes in, open-minded, artistic, a pouter when things don’t go her way, sometimes her thoughts and words don’t match up (she’ll sometimes say pessimistic things, but deep down she’s an idealist), a tad eccentric

Worst fear: losing someone she loves

Clothes: She loves costumes and often wears them on a day to day basis 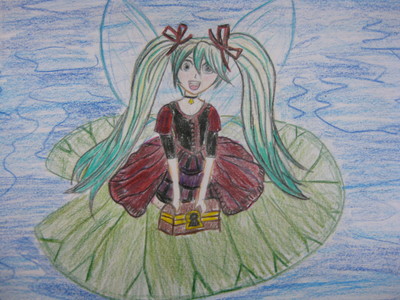 zaidi ya mwaka mmoja uliopita GypsyMarionette said…
Okay, I know not everyone likes to draw but I think there needs to be at least one picture for each Fairy Character.
Maybe find some Disney Fairy coloring pages and color them like the character or something like that if someone doesn't want to draw their's. Or is their a way to take a picture of your fairy on PixieHollow.com?