2
The Zoo Transfer-Chapter 6
posted by sarah12499
My first fanfic :D

Marlene looks over to the entrance "Doors wide open." Skipper looks over "Good. wewe gonna make a distraction again?" Marlene walks over to the doorway "Oh sure, I'm just distraction anyway, right?" Skipper walks over to Marlene "Yep,and your the best, now can we get going?" Private and Rico both follow close behind skipper as they sneak their way over to the desk. "Kowalski!" Skipper whispers. Kowalski looks over at Skipper "How do we get out?" Skipper points to Marlene "She's got us covered." Marlene runs up to Alice and pulls on her pants to get her attention. "Get ready boys" Skipper says.When Alice gets up Skipper, Kowalski, Rico, and Private run to the window, Skipper hesitates "I forgot something, I'll catch up." Kowalski, private, and Rico go back to HQ.Skipper jumps up onto Alice's desk. "What was Kowalski doing in here?"

On the walk back to HQ Keira jumped in front of Kowalski "Keira!" Private and Rico were both confused "Keira?" Kowalski turns around "Can wewe umm." Private and Rico continued walking "See wewe at HQ!" Keira walked around Kowalski in a mduara, duara " I'm not here to socialize, wewe messed with my mission!" Kowalski was confused "Your mission?" Keira was angry and Kowalski knew that he was in trouble "You're so naive Kowalski, wewe don't even know what wewe did, I liked wewe i trusted wewe and wewe throw it back in my face." Now Kowalski was getting angry "I don't even know what you're talking about!" Keira started laughing "Oh let me clarify for you, I had a job, to take out Skipper." Kowalski stepped mbele about to speak "Let me finish! wewe had to go and change the transfer, change it to yourself! Well guess what I'm not changing it back.But there's one thing i will change, the location, the location of my master.He'll deal with wewe then.Enjoy your time with your Marafiki Kowalski, because tomorrow you'll be gone." With that Keira leaps way.

End of chapter 6 it's longer than usual that's because i didn't get time to write another chapter yesterday :D
Rainshadow999 and Number1SkippFan like this
Number1SkippFan ...He changed it to HIMSELF?...oh wow, this ending is sad
sarah12499 it's not over yet
Number1SkippFan ^I know, I meant the ending of the chapter
sarah12499 oh ok
spmana123 NOO!!!!! Kowlaski!:(
Rainshadow999 Rainshadow: That wasn't very nice. Me: She wasn't trying to be nice, *so damn bored* Rainshadow: I mean trying to separate Skipper from his friends, and picking sides. Me: ...She wasn't trying to be nice.... Rainshadow: Keira has a decision to do what she's done, I don't understand why she'd want to do this. Me: You don't understand? Time for me to step in, making people feel sad and depressed, typically by separating friends, you can create exciting torture which can make people feel great! Torture is brilliant! Rainshadow: Please stop, torture isn't great, it's horrible. Me: Oh God, and I have to live with this witchy-cat, goodbye fellow Fanguins! Brilliant story sarah12499! Also I do kind of feel sad about the whole fanfic, I guess happy endings? Still entertained though. What am I even doing? Oh yeah, that was just an advertisement of my OC which one day she'll be the fail of a fanfic... Overall, love your fanfic...
sarah12499 haha thanks and yes Keira my OC is very mean but i love her :)
Where are the Penguins? (spoof of Robot Chicken's "Where's Michael?")
posted by mostar1219
At Los Angeles Convention Center about 15 years in the future

Carsfan: (as a reporter) A huge crowd of fellow fanguins are waiting outside the Los Angeles Convention Center, the location of the POM Convention, to catch a glimpse of their idols before it starts. They should be here any moment. Wait, yes, yes, they're here. The penguins are here! (a limo pulls up and 70s/2020s version of the penguins come out)
70s Skipper: Are wewe sure about this look, Kowalski?
70s Kowalski: wewe have to songesha backward to go foreward, Skipper! Besides, I believe some fanguins here pretty muched begged to see us like...
continue reading...
Love's Revenge Pt.1
posted by JayJay12 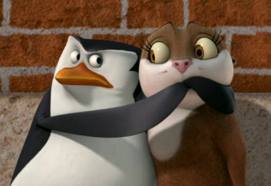 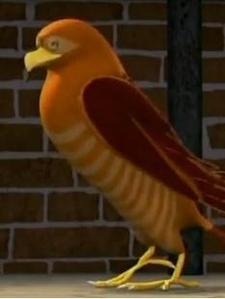 Back at the Central Park Zoo, Kowalski, Rico and Private were desperately trying to think of ways to change Skipper’s mind. “What are we going to do?!” Private asked the others, with a concerned look on his face, “This is only one night of the entire year. Skipper can’t afford to miss it.” “Don’t worry Private. I’m sure Skipper will come tonight. He just need time to think this through is all.” Kowalski assured him. “Do wewe think he would?” “Affirmative. However, if you’re not positively...
continue reading...
3
Held Captive Before krisimasi Part 3/4
posted by egel_0507
“MARLENE!!” Skipper screamed as he pushed Marlene away from the incoming danger. BAM! “I got him Sissle!” alisema the man with a bulky feature. “Very good, Brick. Let’s get out of here before someone else sees us.” alisema the man named Sissle. “What about the rat?” Brick was referring to Marlene. “Like I said, Brick. They are just dumb animals. These birds just got lucky in outsmarting us.” Sissle replied. “You shouldn’t have meddled with us in robbing that diamond necklace.” “We’re glad we came across you-.” He motioned Brick to throw the cage to the ground over...
continue reading...
3
A Skilene-Filled September (Sample 3)
posted by SJF_Penguin2
A Skilene-Filled September
Scenario 3: “Do wewe Take This Otter?”
Friday, September 3, 2010


It was the biggest event taking place at the zoo in years, and all the wanyama wanted to kubeba witness to it. On a siku that the zoo was closed for repairs, a crowd of wanyama gathered inside and outside of the zoovenir duka to watch the ceremony: Antonio and Marlene were getting married.

At 1 o’clock in the afternoon, the event got underway as Marlene walked through the zoovenir shop’s main entrance and began her procession down the aisle, escorted kwa Maurice. As Kowalski played “Here Comes the Bride”...
continue reading...
3
A Skilene-Filled September (Sample 2)
posted by SJF_Penguin2
A Skilene-Filled September
Scenario 2: “Dating Practice”
Thursday, September 2, 2010


Just shy of nine months since she had gone on that infamous tarehe with Fred, Marlene chuckled to herself as she recalled the whole escapade. She found it funny that she had found him funny, only to learn too soon that her “Bobo” was just a run-of-the-mill buffoon. In fact, she had all but sworn off dating ever again the very inayofuata day.

But could she truly hold out on dating again forever? Marlene soon pondered such a question.

“Forever certainly is an awfully long time,” she then thought to herself. “Maybe...
continue reading...
2
A Skilene-Filled September (Sample 1)
posted by SJF_Penguin2
Note: The following is the first of three samples I will be posting here of my FanFiction.net uandishi project “A Skilene-Filled September.” In the project, I will write and publish one short story daily in the mwezi of September 2010 which will explain one possible way that Skipper and Marlene could get together for the first time. My personal uandishi style has always been to portray Skipper and Marlene as just really good Marafiki and to only “hint” at something more, but I have decided to exempt this project -- and only this project -- from that standard.

On FanFiction.net, a much longer...
continue reading...
Back At Madagascar....
posted by rico911910
The team were just in the middle of there planing of how to get off the island. Manly just trying to avoid the annoying lemurs.
Skipper:"Kowalski watch wewe got for me?!"
Kowalski pulls out a blue paper and unwraps it on a smooth rock. Skipper looks down to see the blue prints better.
Skipper:"So, a jaunt kombeo shot Kowalski?"
He looks up at Kowalski, eye brows cocked still leaning foreword.
Kowalski:"Yes sir, its 73% full proof."
Looking at Skipper as if he has created the most brilliant plan ever.
Skipper:"Right?
He say's confused looking at the plans once more.
Skipper:"what would we even do with...
continue reading...
1
The penguin, auk, alka West kwa penguin, auk, alka Girl. ( Part 2 )
posted by rico911910
(for all thoughs who didn't read the first one kowalski's invention pulled every body into Skippers dream will they were all sleeping and made it become real right now they woke up in what apeard to be a desert......)
The penguin, auk West kwa penguin, auk Girl
"what in the upendo of science?" Kowalski says confused as he looked around.
"Um...Kowalski I don't suppose wewe know were we are do you?" Privat says looking at kowalski.
"Nagatory." alisema Kowalski in return.
"Hay!, look over there!" Privat yelld to the reast of them will pointing at a small town off in the distance. When they got to the small town it...
continue reading...
6
What's in your moyo (part 3)
posted by Icicle1penguin
(next day)

Private: So, What was your fortune? Mine was I will learn to overcome my fear. The only problem is, which one?
Kowalski: Mine is that I will make an invention that'll ruin everything.
Skipper: Didn't that happen before?
Kowalski: I guess I'll do it again.
Rico: Blasgal oapea glsbalalagalalep
Private: That's nice Rico! Skippa', what's yours?
Skipper: Umm, Well, It's kinda like...

Marlene: hujambo guys!
Private: hujambo Marlene! We're talking about the fortunes Darla told us!...
continue reading...
The Great Migration (8. One from the Royal Family)
posted by Aquade
Disclaimer: I don't owe any of the characters of the Penguins of Madagascar au any of the places related to the ones that can actually be found au the ones from the show. I do own the story's plot, though, so don't steal my idea. Thanks!

"You're what?" Skipper turned to Leroy. "How could wewe not think it was necessary to tell us wewe were the prince?" he yelled. "What would the kobe, kasa nation think if they knew Ringtail had 'caught' wewe with a blanket? wewe could have had a concussion from falling down the hatch like that!"

Kowalski went on where his leader had paused to take a breath. "And the...
continue reading... 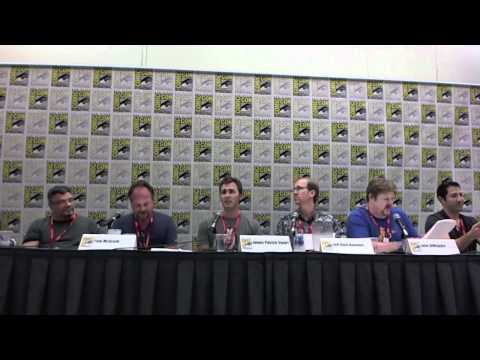 3
Comic Con 2011-Part 2
added by peacebaby7
I upendo this one! It's so weird seeing the voices coming out of the actors! But it still was so freakin hilarious!!!! XDXDXDXDXDXDXDXDXDX
video
penguins
of
madagascar 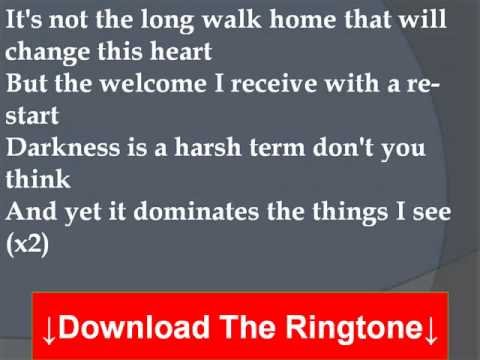 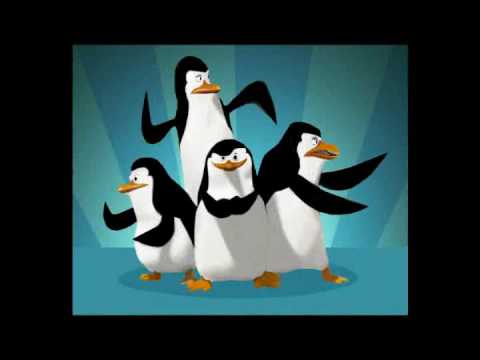 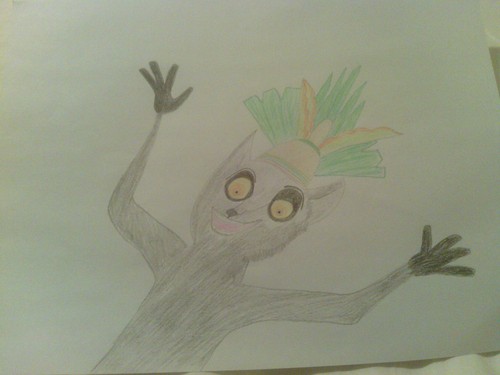 1
King Julien! :D
added by Number1SkippFan
Source: I drew it 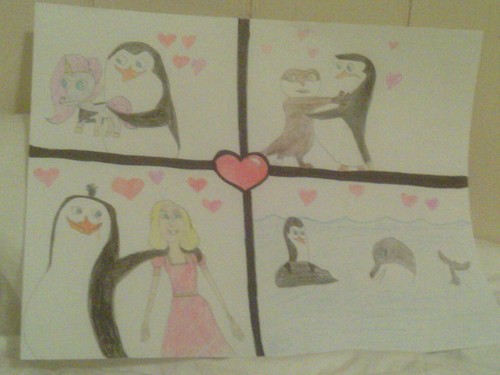 4
Awwww!
added by Number1SkippFan
Source: I drew it 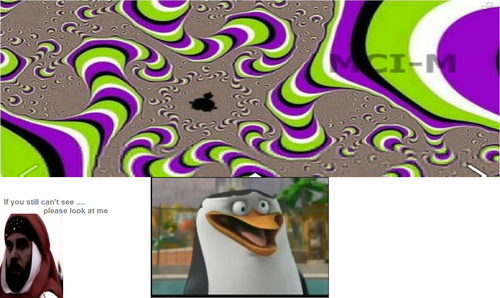 2
Look at the Man and see ....
added by skipperahmad
Source: Me and paint 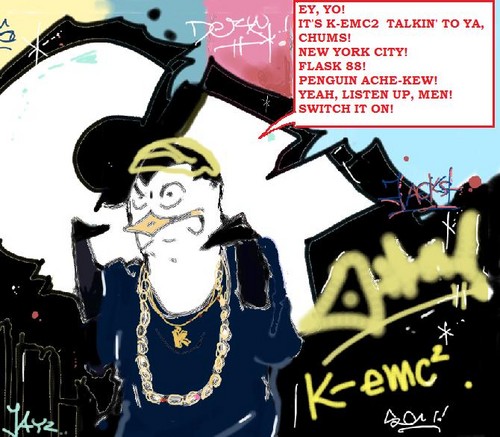