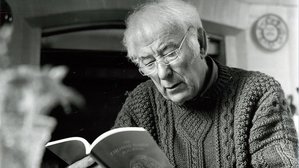 World-renowned poet and playwright Seamus Heaney has died at the age of 74.

Mr Heaney died in hospital in Dublin this morning.

He had been in hospital after suffering a short illness, his family alisema in a statement.

Mr Heaney was awarded numerous prizes over the years and won the Nobel Prize in Literature in 1995.

He was born to a farming family at Mossbawn near Bellaghy in Co Derry on 13 April 1939.

He was the eldest of nine children to Margaret and Patrick Heaney.

His upbringing often played out in the poetry he wrote in later years.