2
The Host Chapter 21 Light in the Dark (4/10)
posted by HaleyDewit
“We’re home, Damon” Elena said. She and Stefan were helping Damon reach the porch, something he’d rather do alone, thinking he’d recovered enough.
“I’m going to open the door” Stefan said. He let go of Damon and ran to the door and opened it. Then he walked back at Damon and Elena. When he wanted to help Damon enter Damon pushed his arm away.
“I don’t need your help” he alisema pissed, avoiding to look at him.
Stefan looked helplessly at his ex, but she gave him a ‘what did wewe expect’ kind of look back. She helped Damon enter the house and Stefan walked behind them like a Lost puppy.
“You want to sleep in your bed?” Stefan asked careful. “Or in the couch? I can get some pillows and sheets”
Damon shook his head. “I’m fine” he alisema short. “I don’t need anything” Especially not from you, he thought, but he was polite enough not to say that aloud.
“You should get some rest” Elena said.
“I’ll lay on my bed, if that makes wewe happy” Damon gave in. “But I’m not going to sleep”
“Okay” Elena said, knowing it was the best deal she would get. She led Damon to his bedroom where he sat down and she sat inayofuata to him.
“So” Elena said. “Here we are”
“Here we are” Damon confirmed.
Elena felt her moyo beating painfully in her chest while her eyes could only stare at Damon’s lips. There was no reason to hold back now.
She leaned forward, knowing there would be no way back.
“Uhum”
Right before their lips connected each other Stefan decided to onyesha up. Elena could hear Damon groan and she herself let out a deep sigh.
“Can I talk to you?”
“I’ll be right back” Elena promised Damon. She followed Stefan outside. “What’s the matter?” Stefan led her to the study room, then turned around. “I need wewe to promise me wewe won’t freak out, because what I’m about to say might sound very sick and it won’t add to my good deeds list”
“What is it?” Elena asked, wanting Stefan to come to the point.
“I think we should tie him up” Stefan said. When Elena’s eyes bulged in upsetting, he hastily added: “Just for now, until he’s fully recovered and he can live with what Bonnie has done to him”
Elena shook her head disgusted.
“I don’t believe you” she alisema trembling. “He’s been in a physical and mental prison for weeks and now that he’s finally free wewe want to push him back in that prison?”
“No! No, that’s not what I want!” Stefan alisema desperate. “But wewe know just as well that when Damon is hurt he snaps. And after everything that happened in his life I don’t blame him, but we can’t risk him going on a kill, because he’s messed up. Not everyone has a Gilbert ring”
“Who knows how long it will take for him to get over it? wewe didn’t see him down there. wewe were too much of a coward to come with me. You’d rather have him killed, so you’d have me for yourself. But trust me Stefan, if he would’ve died, I would’ve banished wewe from my life. Fact is, I still might” she alisema upset.
Stefan looked over Elena’s shoulder. “Please don’t talk so loud, I don’t want Damon to hear us”
“Yeah, God forbid!” Elena exclaimed.
She grabbed the tape out of his hands. “I’ll do it” she alisema angry and she walked back to Damon’s room. She entered it and walked to the bed. Despite his pretending to be not weak, Damon had fallen asleep after all.
Elena sank down on the bed. “Forgive me, Damon”
rochchick and LAGUNS like this
1
The Host Chapter 21 Light in the Dark (2/10)
posted by HaleyDewit
Damon almost let go and fell back, but Stefan tightened his grip on him and pulled him up. They were outside, standing in the wreckage that used to be Bonnies house. Damon jerked his hand and walked away from his brother.
“Damon, wait…” but Damon walked to Katherine, who came his way. She lay her hands on his upper arms.
“Are wewe alright? How do wewe feel?” she asked worried.
“Like someone who’s been tortured” he alisema with a faint smile.
“I’m sorry I wasn’t there to help you” Katherine said. “I had to keep an eye on Stefan”
“It’s okay” Damon reassured her. “Elena...
continue reading...
1
The Host Chapter 21 Light in the Dark (1/10)
posted by HaleyDewit
Once again Elena pulled Damon’s arm over her shoulder.
“I can walk myself now” Damon said, but Elena ignored him.
“You’re not strong enough yet” Elena said.
“Geez, Elena, just admit wewe can’t resist touching me” Damon joked. Elena’s cheeks turned red, but she recovered quickly.
“Good to know wewe can make jokes again” she said. They walked further.
“Can I ask wewe something?” Damon said. “How did wewe find me?”
“I had a dream” Elena began to explain. “In which your voice guided me to you…In my dream wewe died”
She paused to breath. Then she carried on. “Anyways,...
continue reading...
2
Who is Who: Katerina Graham(Bonnie Bennet)
posted by fantastic_evie 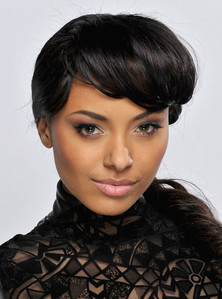 Trivia
Is half Liberian and half Russian.

Her father is the godfather of two of Quincy Jones' children.


Where Are They Now
(2010) Working on the Vampire Diaries in Atlanta, GA

Graham was born in Geneva, Switzerland and raised in Los Angeles, California. Her father, Joseph, is Liberian, and her mother, Natasha, is Jewish of half Russian and half Polish ancestry.[4][5] Graham was born in Geneva, while her father...
continue reading...
2
The Vampire Diaries - After Founder's siku
posted by Triscia95
Elena’s POV
The night got colder as I walked further away from the Founder’s siku party. Just a few zaidi steps and I’ll be at the school.
I reached the school’s front door but when I tried to open them but they wouldn’t budge. I gave up and sighed. I crossed my arm’s trying to keep warm. Looking around trying to find another way in, though the only way I knew of was the doors in the back of the school.
I slowly walked my self to the back doors. I grabbed the frost bitten door handle and pulled it open. Once I walked...
continue reading...
1
Damon and Elena Sexy Times Part 21
posted by c_j_clark
“Every time. Every bloody time…” Damon muttered angrily as he yanked on a new pair of tracksuit trousers he had pulled out of a drawer. He glared at Stefan who gave him a guilty look. Damon threw me one of his shirts. I tugged it on and fumblingly did up the buttons. Stefan was pacing impatiently as we hurriedly got dressed.
“So what is it then?” Damon snapped. Stefan stopped pacing.
“There are new Wanyonya damu in town. Three males,” he alisema worriedly. Damon tensed.
“How do wewe know?” Damon asked, suddenly not as mad at his brother.
“I saw them hunting in the woods. They’re vicious...
continue reading...
6
Damon and Elena Sexy Times Pt. 10
posted by c_j_clark
“So, where exactly are we going, Damon?” Again he told me I’d have to wait and see. We drove for a long time until we reached a huge forest. Driving through the thick undergrowth made me remember what Stefan had talked about the night before and I shivered.
“You ok?” Damon looked at me, a puzzled look on his face.
“I’m fine, don’t worry.” I sat back against the kiti, kiti cha and closed my eyes. Suddenly someone was shaking me gently.
“Elena, wake up, we’re here,” a voice drifted into my consciousness.
“Wha- Did I fall asleep?” I alisema groggily. Damon laughed softly.
“Yes you...
continue reading...
6
Official Series Summary [from the CW]
posted by DefineDelicate
Official Series Summary:

Four months after the tragic car accident that killed their parents, 17-year-old Elena Gilbert (Nina Dobrev, “DeGrassi: The inayofuata Generation”) and her 15-year-old brother, Jeremy (Steven R. McQueen, “Everwood”) are still trying to cope with their grief and songesha on with their lives. Elena has always been the nyota student; beautiful, maarufu and involved with school and friends, but now she finds herself struggling to hide her sadness from the world. As the school mwaka begins, Elena and her Marafiki are fascinated kwa a handsome and mysterious new student, Stefan...
continue reading...