5
Tokio Hotel EMA (please read)
posted by trisarahtops
link
Watch the video and please read the "more info." Yes, it does take forever to exceed all of the countries, but they deserve to win! We've soooo got this :)
-Thanks!

link
Watch the video and please read the "more info." Yes, it does take forever to exceed all of the countries, but they deserve to win! We've soooo got this :)
-Thanks!

link
Watch the video and please read the "more info." Yes, it does take forever to exceed all of the countries, but they deserve to win! We've soooo got this :)
-Thanks!
2
lyrics of "Wo sind eure Hände" with translation
posted by sexymaedel
Wo sind eure Hände?

The pain of upendo will last forever
Promise me, promise me
We'll celebrate the pain together
The pain of love, love, love

The pain of upendo in all of us
It hits wewe like a hammer
The pain of love, we can't turn off
Let's celebrate the drama

The pain of love, don't let us crush...
continue reading...
1
Tab for kwa Your Side
posted by rawrr-doll
INTRO: VERSE:

Tom was standing at the door looking at the two small children sitting on the couch.


“They don't bite wewe know,” Bill said, kneeling down to
hand them their drinks.


Even though Bill and Tom were their cousins they still called them ‘Uncle’ because their mommy taught them to be polite.


Tom just shrugged, wondering why the hell Bill had agreed to watching their nieces. He sighed and walked up to Bill who was still kneeling down. They shared a look before leaving the room. Bill told them he'd...
continue reading...
1
ATTENTION lyrics
posted by nehazeb
I'm trying to tell you
I'm trying to know you
I'm dying to onyesha you
Fighting to get you

Oh no, I'll never let wewe go
Oh no, I hate that I need wewe so

Look at the end, look what we do
Here and now we need you
Silence can destroy
Get up and raise your voice

Make some noise
Here and now, noise
To the world, noise
All the things wewe believe in, noise

Let them hear you, noise
Let them feel you, noise
Make them know
That wewe can make noise, noise

You are free, wewe are innocent
You believe in a happy end
Days turn into years

Make some noise
Here...
continue reading...
1
Has Tom got a new girlfriend?
posted by rawrr-doll

I found myself pondering over this yesterday, and I've come to the conclusion that this might just be one of Tom's many one night stands. But, who knows? wewe can never be 100% sure.. maybe this is the start of Tom's 2009 upendo affair with Chantelle Paige. I dunno, but I know there's a picture, and here it is.


Also, how much does he look like Bill now? Good lord, they are finally identical twins again! And it looks like the rumour about the piercing was true too, cos I've seen a few pics with him wearing one, and it doesn't look photoshopped. Personally, I'm loving Tom's new style, but I don't think I like his "girlfriend". She looks really bitchy, like the kind wewe see in hip hop videos, yes? But if he's happy, it's all good. As long as Bill's still available XD
Tokio Hotel - Helpful viungo and information for ongoing voting and awards.
posted by Aiako

Bill Kaulitz w/Far East Movement and Germany's Next Top Model
Alright, so some of us already know about these. Good for you, pat yourself on the back for staying in touch. If wewe didn't here's a helpful review.

You can create an account if wewe don't already have one au use your Twitter au your Facebook to connect. wewe get to vote a certain number of times within each time frame. (each day, I think) and if wewe have reached your voting limit, wait until the time frame has elapsed to vote again. Vote to help Tokio Hotel WIN!!

Instant karma's gonna get you
Gonna knock wewe right on the head
You better get yourself together
Pretty soon wewe gonna be dead
What in the world you're thinking of
Laughing in the face of love?
What on earth are wewe trying to do?
It's up to wewe - yeah wewe

Instant karma's gonna get you
Gonna look wewe right in the face
Better get yourself together darling
Join the human race
How in the world wewe gonna see
Laughing at fools like me?
Who in the hell do wewe think wewe are?
A superstar? Well, right wewe are

humanoid
2
Hurricanes and Suns
posted by maiatokiohotel
Love, is a game, for every one
But this is wewe and me
We had a thousand lives in one
We had hurricanes and suns
Hey, don't wewe know we've just begun

The first in your world, that understands
Are the last that feels relieved
It's a melancholy time
But together we'll be fine
Hey, let's go with a smile,
Into the, into the end

visigoth voting
OMA has provided an option wewe can EARN kwa trading in your points for a triple voting value on the last day.

Here is how it works (Visigoth Voting):
Your daily voting cap, herufi kubwa will triple (multiply kwa 3) starting on June 26, 2012 at midnight Eastern time for 24 hours. Example: If wewe are a level 1 super fan, your voting cap, herufi kubwa would normally be 25 kura per day. With Visigoth voting, it is tripled to 75 kura per siku on June 26.
You can find the link here: link

If your maximum level (a level 5 super fan), your voting cap, herufi kubwa would normally be 500 kura per day. With Visigoth Voting, it is tripled to 1,500....
continue reading...
3
TH-Nokia event
posted by Stmsteph
this info is on www.tokiohotelrocks.com

The cooperation gives Nokia and the mashabiki of the band an unique opportunity to meet Tokio Hotel close-up! Already on the 27th of August (Cologne Festplatz / Südstadion), the four Magdeburger will perform their biggest hits from the past and a new song from the yet unreleased...
continue reading...
3
Translation - junk, taka Magazine n º 45/10 (Singapore)
posted by nehazeb

The quartet of Bill and Tom Kaulitz, Georg Listing, Gustav Schafer and can only, on average, 20 years, but they have been playing muziki all over Germany for the better part of a decade and have found global stardom the release of her first English album Scream. Now armed with their fifth studio album Humanoid, Tokio Hotel has its sights set on nothing less than total domination of pop.

Really, the choice of album title has a set of young people who have spent most of his youth playing in a sea of faces changing scenarios and have been persecuted...
continue reading...
4
lyrics of "totgeliebt" with translation
posted by sexymaedel
Totgeliebt

Sie kommen näher- sind hinter uns her
Wollen dich und mich
Lass mich jetzt los!...
continue reading...
7
63 ways to annoy Tokio Hotel
posted by kaulitztwinsfan
1. Insist on calling Bill and Tom ‘Thing 1’ and ‘Thing 2’.
2. Read “Green Eggs and Ham” out loud late at night.
3. When they come back to their nyumbani town after a tamasha yell “Yea, you’re back!” and hug them like you’ll never let go. After about five dakika constantly glance at the clock and say “Shouldn’t wewe be going somewhere?”
4. Sell all four of them on eBay.
5. Tattoo your name on each of their foreheads in the middle of the night in permanent marker.
6. Dress up as a chicken and sing their songs loudly and off-key.
7. Constantly remind them that the female of the...
continue reading...
2
Bill and Tom's new hair styles.
posted by rawrr-doll

I have no idea what is true and what isn't.

But what I do know that Bill had braids, and they weren't dreads, so he could take them out if he wanted to.

There have been a lot of rumours regarding Tom's hair. First, it was that he cut it, then it was that he dyed it black, and now it's that he's had black cornrows and a new piercing.

We haven't seen a lot of Tokio Hotel for a few months, so there's bound to be a lot of rumours.

Either way, Tom and Bill are still the Kaulitz twins and we upendo them, and I happen to quite like Bill's braids!

I'm not too sure about Tom's black cornrows, and to be honest, I didn't think wewe could change to cornrows once you'd had dreads - I was told he'd have to shave it off. :S

So there's what's going round, let me know if wewe think it's real au not, au if wewe like it. 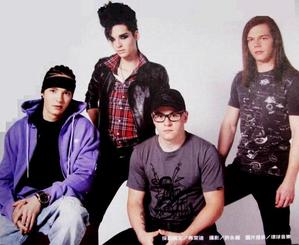 Humanoid - Tokio Hotel
Although they had only 16 years old on average when they debuted, they had already won a Best Newcomer award at Echo, which is the highest honor the mduara, duara of German muziki in a short period of time. Tokio Hotel is composed of the visual vocalist Bill Kaulitz, guitarist Tom Hip Hopera has braids and is the largest twin, bassist Georg Listing and drummer, ngoma Gustav Schaefer. Since their debut, they have three albums 1, 4 singles 1, 10 records of platinum and 40 awards from several different countries, including "Best Newcomer" at the VMA 2008 and "Best Band" of the European...
continue reading...
More Cards
1234567891011