I was watching Super Crazy Happy Fun Time Japan again today, and I got to thinking, in the inayofuata couple of episodes, both link and link leave, meaning that DJ and Lindsay will be the last two people left on Team Victory.

So basically, there would be two contestants left on Team Victory, and five left on both Team amazon and Team Chris.

Team Victory can't compete properly with just two members, Chris would have to;
- Bring back one au two contestants
- Merge the teams
- au have a member from another team go on Team Victory.
Because we've seen multiple pictures of linklink and link, it may be possible that these two are coming back as replacements for members of Team Victory.

Now, this is just my theory, it doesn't mean it's true. It's just what I think may happen. So, any thoughts au opinions on this matter?

taytrain97 likes this
The_Kill this might be true
CHERRY111898 i agree
PrincessVandal Very interesting theory, but strangely I think it might happen.
GWENxTRENT I so totaly agree!
tdafan121 Wait, if this is true, then the Welcome Two The Jungle rumors may be true to! This episode actually started as a TDA myth, apparently, claiming Izzy and Cody return. But it may have all been a misunderstanding and the episode was leaked somehow from TDWT before the name change and before anyone knew who Blainely was so it could've been easily assumed that Izzy returned as well as one of the fan favorites who wasn't competing in the season as of yet, who they assumed was Cody. But the competitor returning was actually Duncan and the person not competing in the season as of yet was Blainely and the season was TDWT! It all makes sense now! YES! This [i]has[/i] to be a correct or at least nearly correct theory! YAY! I at first thought they would just split Team Victory in 2 and put one on Team Amazon and the other on Team Chris Is Really, Really, Really, Really Hot.
Duncan_Courtney ^Tdafan121, That first part of you're theory kinda doesn't make any sense. Welcome Two The Jungle has always been a fake rumor. I really don't know how you managed to connect the two.... I guess because a guy and a girl might return?
sumerjoy11 I like ur theory.
3
Total Drama Believers-episode 2 part 1
posted by STALKER-TOAST
--
Theme song play
--
The camera pans from side to side of all the contestants in the mess hall,which this time around was outside.
Buddy.Buster,Leeroy,and Mr.Fluffykins are sitting at the same table,trying to eat the food.
Leeroy:*looks at the other contenstants on his team with a scowl*Bastards.
Buster:Leeroy,I know what they did was horrible,but remember,they'll all get what's coming to them eventually.
Mr.Fluffykins:Speacking of getting stuff,what'd wewe do with the monster,Buddy?
Buddy:*pulls it out of one of his pockets inside his jacket*Nothing.
Buster:Oh,I'll fix that.*opens it,turns Buddys head...
continue reading...
1
Total Drama Real Life Part 1
posted by RavenRox2

Marcuse
Chris: Welcome to total drama real life! 12 newbies with 3 oldies! everyone's already here and chatin' up a stoooorm! the newbie's are.......
Rayven, Penny, Jake, Lulu, Lisa, Aydan, Marcuse, Mack, Kelly, Jar3d, Natalie, and Jade! the oldies are, duncan, Owen, and Harold. the newbies just got here and there looks like upendo is in the air and friendships are forming!

Duncan: what;s yyour name?
Rayven: Rayven. and i know who wewe are!
Duncan: Really?!
Rayven: well duh!
Duncan: how old are you?
Rayven: 16!

Chris: duncan and rayven are off to a good start!

Chris seems like...
continue reading...
2
If I was Trent
posted by IDDfan
inayopendelewa movie: 9

my inayopendelewa song: nine in the afternoon

my inayopendelewa animal: cockroach because it can live nine days without head

this was the surprised geuss pic
tamiki:nothing happened. roxy:alot has happened. Twins:you kissed andrea wewe sly dog you. tamiki:WHAT!! Christy:theres visitors?? Roxy:there here already??? ranma:sup Roxy:make your self at home. Ranmas dad:roah roah!!! Christy:AHHHHHHHHHHHHHHHH A PANDA. ranma:thats just my pop. Roxy:christy get some hot water. christy:why? Roxy:get the hot water now!!!! Christy:fine. Ranma:how did wewe know??? Roxy:oh your dad told me on the phone. Shampoo:RANMA!!! (snuggles ranma) Ranma:I cant belive wewe followed me. (Pours hot water on panda) Ranmas dad:do wewe got any chakula like noddles!!! Ranma:POP wewe can...
continue reading...
total drama the haunting episode 8 part 1
posted by splinter505
Phil: last time on total drama the haunting, 2 campers got to be clowns while the rest sat down to watch it at the end jumanji won the zombies a trip home. what will happen who will loose and while my girlfriend visit find out zaidi on this episode of total drama the haunting.
*horn honking*
Phil: looks like there back
killer zombies: *getting out of limo*
Phil: wait for it
death: were already here
*another car horn
Phil: say hi to Alex and Kevin the werewolf
Aydan: why is Alex back?
Phil: i Lost a bet
jumanji: what is the werewolf here
Phil: that was the bet, oh and i'm getting bored of the teams, so i'm breaking the teams, ghost bring the zombies
ghost: ok
Phil: time for a commercial break
4
manga Crossover Ch. 4 - The upendo of the Black Rose
posted by Lolly4me2
Sofie panted and huffed on all fours on the floor.
"That's enough special drilling for the day," Duncan told her.
"Thank you... so much."
"You handled the ribbon very well. You're making very quick progress." He smiled.
"Do wewe really think so, Duncan?" Sofie looked up at him still panting.
"... wewe don't really buy that stuff, do you?"
"SHUT UP, RANMA!!" She screamed, tanlged in a mess of ribbon.

"Even if it's true..." Sofie muttered.
"... It's only a week until the match. I should have known, I never should have agreed to help." She sat in silence, while small drops of water dripped down her cheeks...
continue reading...
10
Who killed Chris Mclean??????? Book 1.
posted by megaDUNCANfan
vamp_grl_123 and me worked hard on these stories....here they are......


"Leave me alone Chris!!!"Courtney said,"come on please be the co-host in the new season???Please???"Chris got on his kneese and pleaded"PLEASE!!!!"He said."ok."Courtney alisema "meet me at my trailer at 8 so wewe can sign."later at 8 "hey courtney" chris alisema Courtney walked in, at 9 she walked out of the trailer and headed to Duncan's house "Hey prinsess, wat r u doin here?'he alisema flirty,"here to visit."she alisema kissing him and he pulled her in.


There is 1 witness.
2 accused.
The person Who did it.
And Chris's lover(wife).


One thrilling series with a couple of surprizes!!!!I am not kidding!!!!


I live 4 the drama!!!!
His lover swears to kill whoever killed her husband.

"Leave me alone Chris!!!"Courtney said,"come on please be the co-host in the new season???Please???"Chris got on his kneese and pleaded"PLEASE!!!!"He said."ok."Courtney alisema "meet me at my trailer at 8 so wewe can sign."later at 8 "hey courtney" chris alisema Courtney walked in, at 9 she walked out of the trailer and headed to Duncan's house "Hey prinsess, wat r u doin here?'he alisema flirty,"here to visit."she alisema kissing him and he pulled her in.
1
Total drama culedsac episode 2: first elimination episode
posted by dxarmy423
Chris: welcome back to total drama culdesac.

Chris: the winners of the races were:

Chris: so that means noah, owen, nazz and 3 other campers chosen at bila mpangilio will be put up for elimination.

Chris: here are the campers up for elimination

Leshawna: what I didnt even do anything and Im up for elimination.

Katie: but if I get eliminated then I will have to leave sadie!!!

Chris: some body shut her up please!!

Please...
continue reading...
1
duncan,courtney,and ashley(part 4)
posted by god-of-love
*phone rings*
"hello."said courtney sleepy."hey wats up?"said duncan very happy."oh is u duncan,look i going to talk to u later u know that if my mom wakes up and sees me talking to u she will kill me!luv ya!"said courtney hanging up."omg is so early why will duncan wake me up at 5:00am?'courtney asked her self.
*at bridgette's house*
"geoff get up!geoff!geoff!!!!!!!(bridgette slaps geoff)""wat was that for?"said geoff."courtney want me to go with her to the club.can u come with me?"asked bridgette."no!im too sleepy and me and duncan r going to watch the football game that tyler is playing tonight."said...
continue reading...
3
Total Drama fanpop Ep.2
posted by vamp_grl_123
Cameras start. V and Heidi are sitting in the trailer. “Welcome back to total drama fanpop. Since we let we gave our campers a challenge and we have a winner who gets the luxury cabin. But first let’s look back to the action that took place when the challenge was give.” Heidi said. The screen goes fuzzy. (If wewe want to catch all the unpublished action go to the comments)

We had Brownies. Team Drama. Fangilryness.

Sofie:
*confessional*
THESE PEOPLE ARE IDIOTS! I picked a fricken team name, and they act like I'm sitting in the corner silently! I...
continue reading... 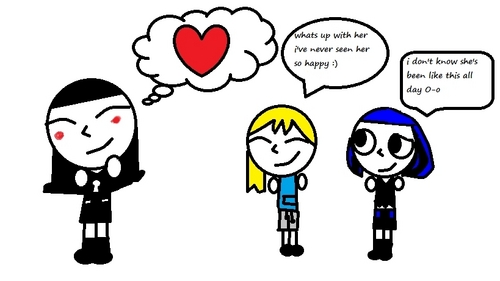 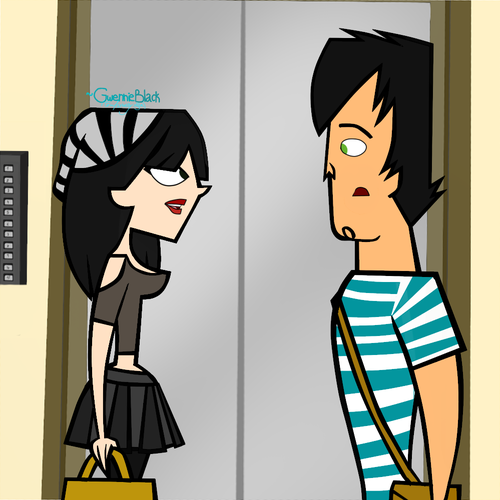 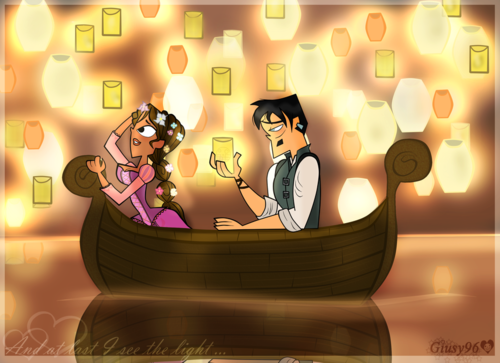 2
I see the light
added by DandC4evacute
Source: Giusy96 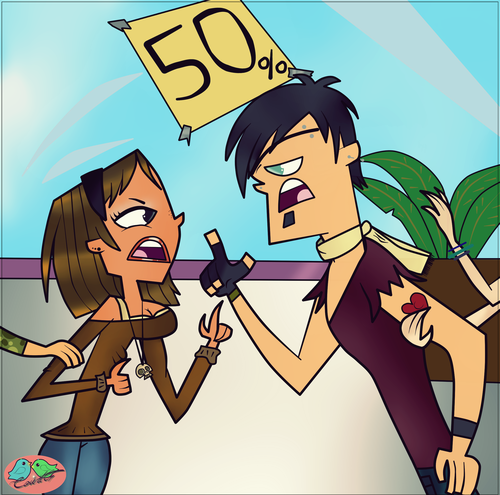 1
Fight at the shopping center
added by DandC4evacute
Source: CourtG 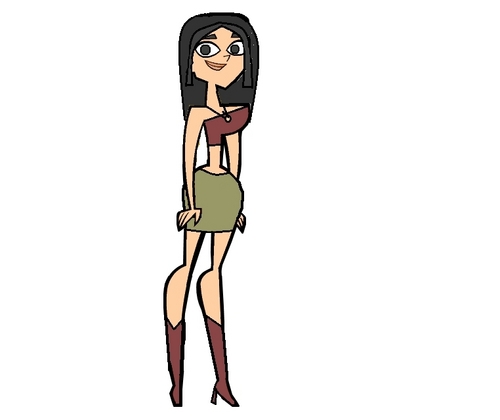 lindsay and heather mixed
added by tdigirl
Source: me 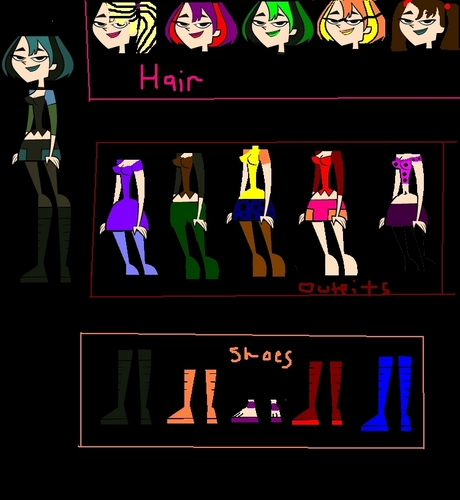 Gwen Dress Up
added by graysie14
Source: me 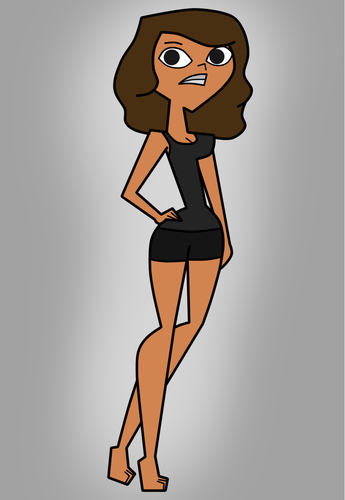